Adrian Clarke returns with a pair of EFL goal angles

When the EFL weekends come around, I always enjoy looking for a BTTS angle, or if I’m feeling courageous, I don’t mind tackling the BTTS NO market either.

Hoping for no goals is no fun, but it can be a profitable ploy!

In this week’s column, I’m putting up one of each, starting in the Championship…

Attacking Weapons Should Ensure Goals When The Cherries Visit Cardiff

Scott Parker’s Bournemouth have top two potential, and if they are to get promoted this season, they will go about their business in a positive, front-foot manner.

Scoring in six of their seven Championship matches, registering at least two in all of those, the Cherries are built to attack.

Five-goal Dominic Solanke is showing signs that his potential might be fulfilled after all.

His power, movement and finishing prowess put him in the running for this season’s Golden Boot.

Scott Parker Bournemouth’s side have been full of attacking intent this season!

Down the left flank, two young whiz kids have enlivened the side.

Full-back Jordan Zemura and winger Jaiden Anthony have been on fire, tormenting all-comers with a sprightly partnership that’s fizzing with fire in their bellies.

Add David Brooks and Phillip Billing, two Premier League class players, into the mix, and you have got a Bournemouth side that smells of goals.

At the back, they are more of a work in progress.

Young Irish keeper Mark Travers is between the sticks, and although he had a blinder last time out at home to Queens Park Rangers, he does not convince me when high balls are sent into the danger zone.

And this is partly why I’d have to fancy Cardiff City to cause the Cherries plenty of problems on their own patch this weekend.

Capable of pinning opponents in with their efficient pressure football, Mick McCarthy’s side always hoist a stream of corners, wide free kicks, and long throws into the box.

If you don’t have a dominant keeper, this can put you in trouble.

Up against a Bluebirds team that has fashioned 42 set piece shots and four set-piece goals in seven games, Travers the visiting number one, is sure to approach this clash with at least some trepidation. 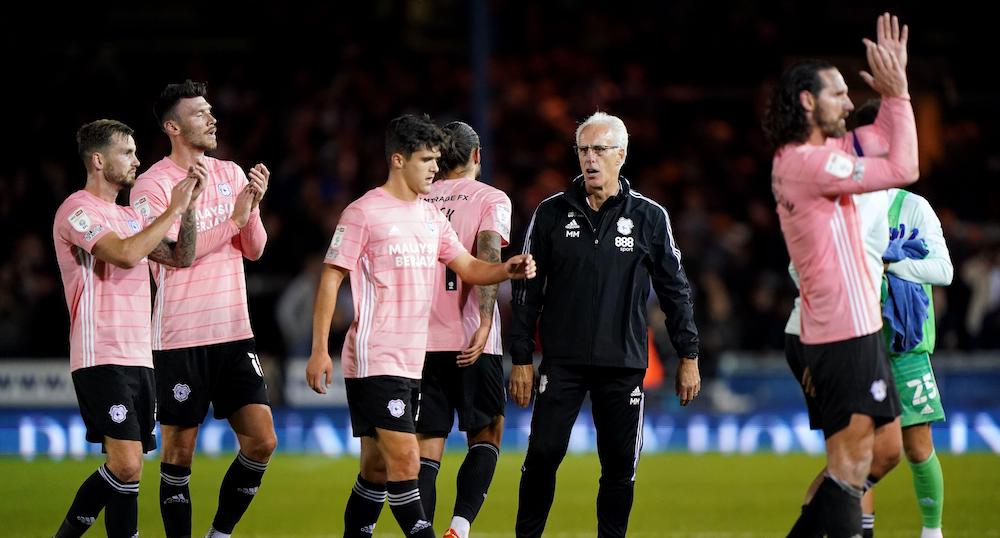 Adrian fancies that Cardiff City will get on the scoresheet on Saturday.

Cardiff City may have drawn a blank at Coventry in midweek, but they do create opportunities, especially in front of their own supporters.

They have found the back of the net in six successive home fixtures and 11 of their last 13 outings at the Cardiff City Stadium.

Over 2.0/2.5 Goals is a consideration at 1.87 as matches involving these two sides average 2.71 each, but I am drawn towards the BTTS angle here.

BTTS has landed in 9 of 14 matches involving Cardiff and Bournemouth combined this term, and each manager has individuals who look suited to hurting the other team.

The Cherries’ movement, skill and pace will torment a very big and robust home rearguard, while the hosts’ strength in the air has potential to trouble Parker’s promotion chasers too.

At a price of 1.8, I am backing Cardiff City and Bournemouth to both score in what could be a fascinating clash of styles.

Let’s be honest it’s been a tough watch for Tranmere Rovers fans in the early weeks of the 2021-22 campaign.

Since Micky Mellon returned to the Wirrall, he’s overseen two goalless draws and five matches that were decided by the solitary goal.

Has an EFL team ever been involved in a drearier start to a season?! It’s hard to imagine they have.

Tranmere have talent up top and good players all over the pitch, but until now, it’s not clicked or been cohesive.

With just 48 efforts from open play, they are ranked 19th in League 2 in that metric, which goes to show their meagre goal tally is not a hard-luck story.

For me, they have a squad that’s capable of earning promotion but as it stands it appears any bid for the play-offs will be built around a solid defensive set-up.

A rare sight this season for Tranmere fans!

The same might be said for this weekend’s opponents Salford City, another club with fierce League 1 aspirations.

While no one can rival Tranmere’s incredible 0.71 goals per fixture average, they are the third lowest with a paltry 1.86 goals per match on their current record.

The Ammies boast a squad packed with goal-getters, but until this point, it hasn’t gelled too well.

Only once in seven games have Salford scored more than once.

On paper, this is 16th v 14th at Prenton Park, but the reality is that both clubs are likely to be in the promotion shake-up in April and May.

This, I believe may impact the attitudes of both managers, who will be determined not to lose.

If a first goal is scored, whoever gets it will look to protect that lead.

If there’s a long wait for the opener, we may not get one.

BTTS NO has clicked in every Tranmere match so far and in 57% of games involving Salford.

Based on what has gone before I don’t see this one being an end-to-end chance-fest.

My selection at 1.89 is BTTS NO for Tranmere v Salford. The formbook says it’s going to be tight and cagey.