Adrian Clarke - International Break Be Damned, I've Still Got A Pair Of EFL Bets For The Weekend

Adrian Clarke is aiming to keep things ticking over this weekend with a pair of EFL selections he’s pretty bullish on!

The dreaded international break may be upon us (yet again), but there’s good news to report for those who have limited interest.

Yes, the third and fourth-tiers of English football are open for business this weekend, and as always, I’ve been scouring the markets for value selections.

Here are two matches that have caught my attention.

You might get neck ache watching Wycombe Wanderers do battle with Gillingham this Saturday, but it’s a contest that does have the whiff of goals.

They are ranked number 1, and 2 for making the fewest short passes in League 1, so pretty patterns are likely to be few and far between.

It’s in the air that they both excel, winning aerial duels for fun.

Both teams cause significant problems for the opposition whenever they send crosses and set plays into the box.

Backing that up with numbers, Wycombe have already netted five set-piece goals, with this weekend’s visitors bagging three of their own.

Each is a little vulnerable at the back too.

Wycombe (2/10) and Gillingham (1/11) have only managed three clean sheets between them from a combined total of 21 matches.

Wycombe have been set-piece specialists this season!

The Chairboys, for all their strengths at attacking corners and wide free kicks, also have a problem defending them.

Leaking five goals in that manner, they may be nervous of a Gills side that are never anything but aggressive under the leadership of Steve Evans.

The stats point me in the direction of a BTTS selection at Adams Park.

Until this point, 73% of matches involving Gillingham in League 1 this term have seen both teams find the back of the net.

For Wycombe, it’s happened in 60% of fixtures, including three of four at home.

These are not two of the most refined teams going forward, but they always carry a threat.

The Kent side, currently languishing in 18th spot, have scored in nine of 11 outings. Giant Gills frontman Vadaine Oliver has continued his impressive form at this level, netting four times so far. 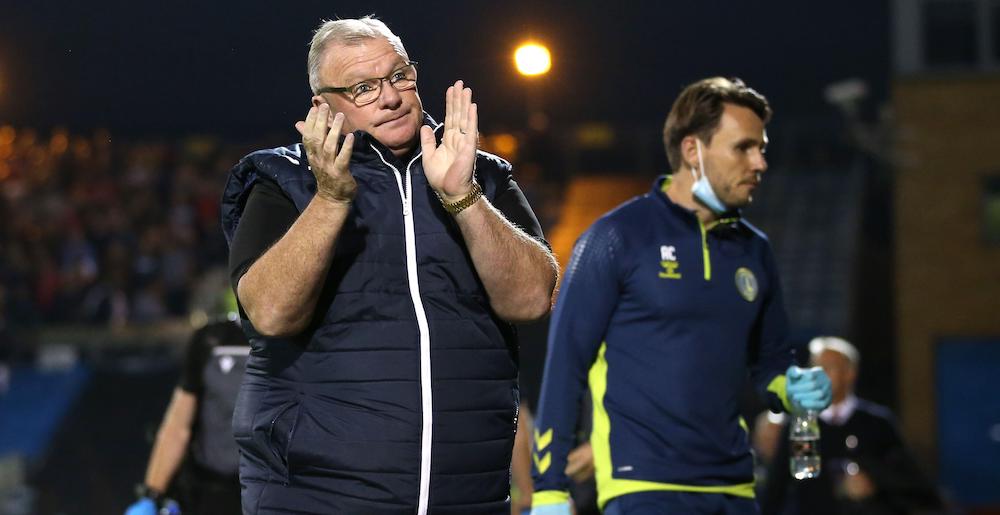 Steve Evans’s Gillingham side have been kind to BTTS Backers of late!

As for Gareth Ainsworth, he is blessed with several excellent attacking options, which is just one of the reasons why his 5th placed side have scored in eight of ten games too.

In terms of their personalities, these two gaffers are chalk and cheese, but they share a love for getting the ball forward quickly, and both want to deploy two strikers (the old fashioned way) in the majority of matches.

I can see each respective strike pair giving the opposition rearguard headaches in this encounter.

An Over 2.5 goals pick at 1.85 is of interest, but I prefer a BTTS selection here, priced at 1.79 with Matchbook at the time of writing.

Tipping Harrogate To Hammer The Iron

Harrogate Town’s rise up the pyramid of English football is a wonderful story under Simon Weaver, and based on what we’ve seen of them so far this season, they are not done climbing.

They are an ambitious club with their eyes firmly set on promotion to League 1.

Amassing 19 points from 10 games, the Sulphurites lie in second place right now, and this weekend they entertain the worst side in the EFL, Scunthorpe United.

Neil Cox’s side have won just once this term and are, for want of a better phrase, a bang average team in every department.

When you boast the worst defence (17 conceded) and the weakest attack (just six scored), it’s hard to find too many positives, so there’s no doubt they will be on edge ahead of their visit to the Yorkshire high-rollers.

When you have the highest xG Expected Goals Against tally in the division, as they do, there’s a reliance on providing an attacking threat of their own. Failing to score in 3 of 5 away games, that’s not especially evident.

Weaver’s side has only been beaten once, scoring two or more goals in 70% of their matches.

In a hardworking and nicely balanced 4-4-2, they deploy last season’s star striker Jack Muldoon and this season’s top scorer Luke Armstrong in a first-class pairing that has netted ten goals between them. That’s four more than their upcoming opponents have managed as a collective.

With The Iron being so creaky out of possession, which is a problem when you see as little of the ball as they do, and Harrogate bursting with confidence, it is not hard to envisage a comfortable home win.

While I should disclose that Harrogate’s form on their own patch is nothing to write home about (2 wins, three draws), this feels like the right moment for them to perform in front of their expectant fans.

Backing Harrogate on the nose (1.63) is too short for me, but I’m happy to push the boat out to Harrogate -1 on the handicap, which comes in at a far tastier 2.14.

If they only win by one, we get our stake back, but anything more brings home the bacon, and I like that angle.

This bet has landed in four of seven Scunthorpe matches against top-half opposition, so if they make this a competitive affair, it will buck the trend.