Football betting analyst Mark O’Haire returns to share his favourite fancies from the weekend’s European action with a pair of plays from Ligue 1 and Serie A.

BOTH SIDES TO BANK IN FRANCE

It’s been a miserable season for the famous French outfit St Etienne.

Les Verts have been embroiled in takeover talk, financial crisis and are a side that’s struggling to stay afloat in Ligue 1.

The 10-time champions currently occupy the relegation play-off place and time is beginning to run out if Sainte are going to preserve their top-flight status.

Head coach Claude Puel was dismissed in early December and Pascal Dupraz has since been appointed with St Etienne’s board believing the new boss’ charisma and emotional character could provide the catalyst for a turnaround.

Les Verts have made improvements under the former Toulouse boss but last weekend’s 6-2 thrashing at Lorient raised doubts.

Sainte had stormed into a two-goal lead in the crunch six-pointer before a remarkable collapse. Dupraz labelled the defeat as a “collective catastrophe” and was very critical of the character and attitude of his players. Forward Denis Bouanga went further, claiming the performance “brought shame on the whole club” amongst a volley of unprintable expletives. 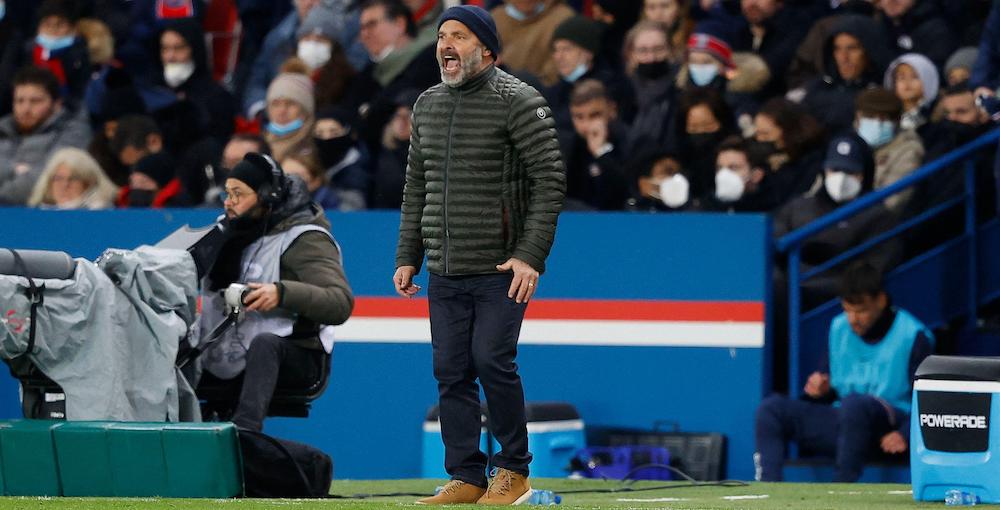 Pascal Dupraz has fired a rocket at his players following last weekend’s collapse at Lorient!

So a reaction and response is anticipated as St Etienne return to their atmospheric Stade Geoffroy-Guichard home on Saturday.

Les Verts have also been handed a timely boost for the occasion with key playmaker Wabhi Kazhri returning from injury and his inclusion should give the hosts threat and menace in the final third as they prepare to face mid-table Brest.

Sainte have already scored in 13 of their 16 Ligue 1 games at the Geoffroy-Guichard this term – a reasonable return considering their plight – and Dupraz’s side should be encouraged by Brest’s measly tally of five clean sheets in 31 league outings across 2021/22.

Only one of those Brest shutouts was earned on the road as the front-foot approach of visiting boss Michel Der Zakarian has led Les Pirates to a glut of high-scoring showdowns.

The guests have found the back of the net themselves in 25 of 31 Ligue 1 assignments yet come into this contest clear of danger and operating in mid-table obscurity.

There’s therefore a realistic chance this contest turns into an open and entertaining encounter with Both Teams To Score standing out at 1.91.

The odds on offer imply only a 52% chance of success yet both St Etienne and Brest are both boasting an excellent 20/31 (65%) hit rate in this market across the whole campaign.

Dig a little deeper, and the duo are each posting a super-strong 12/16 (75%) hit rate for Both Teams To Score winners in their respective home and away matches, scoring in 26 of their collective 32 fixtures and silencing just two opposition outfits during the same sample.

Sassuolo have found form during the final quarter of Serie A’s campaign with Alessio Dionisi’s freewheeling troops picking up top honours in five of their most recent seven encounters, a sequence that includes an eye-catching victory away at defending champions Inter, as well as turning Atalanta over last weekend.

The Neroverdi have roared into the top half of the league ladder and are keen to finish with a flourish.

European qualification places look beyond the Emilia-Romagna outfit but Dionisi insists his squad are desperate to sign off with a series of strong performances, particularly with a clutch of Sassuolo’s leading lights attracting interest from clubs home and abroad.

First up is a trip to relegation-threatened Cagliari on Saturday.

The visitors will arrive with a full complement of attacking players and that means the eye-catching quartet of Domenico Berardi, Gianluca Scamacca, Habib Traore and Giacomo Raspadori will be in tandem – the four Sassuolo stars have contributed 43 Serie A goals between them this campaign.

Italian international Domenico Berardi is one of a host of attacking players that catches the eye in this Sassuolo side.

The firepower Dionisi has at his disposal can prove pivotal and the Neroverdi have displayed a real knack for getting amongst the goals on their travels.

Sassuolo have now scored 33 goals in 16 away days – the joint-best goals-per-game figure on the road – with the visitors striking twice or more in 10 (63%) of those 16 games as guests.

Sassuolo have notched multiple goals in eight of 11 trips to teams outside the top-six and could enhance that record here considering how Cagliari have unravelled of late.

The Sardinians showed signs of a resurgence at the beginning of 2022 but Walter Mazzarri’s men have since suffered five straight defeats and have managed a solitary shutout all season.

Only no-hopers Salernitana have conceded more goals than Cagliari this term and half of the Rosoblu’s 16 games on the island have seen the strugglers ship multiple goals (conceding averaging 1.75 goals-per-game as hosts).

With Sassuolo firing on all cylinders, the 1.96 available on the visitors to strike at least twice holds plenty of appeal this weekend.