Up On The Ladder

Matchbook’s product team takes a look at some of the recent, under the hood changes to the Matchbook system.

Some changes we make to Matchbook, such as changing the layout, are pretty obvious to anyone that uses the site.

But recently, we have made quite a fundamental change to how Matchbook operates.

Still, because it doesn’t have an obvious user interface element, it may have flown under the radar of many of our customers.

Any guesses what we’re talking about?

Pat yourself on the back if you said ‘a new odds ladder’.

For anyone not patting themselves on the back or not familiar with what an odds ladder is, here’s a brief explanation before we explain a little about why we have a new one and what was so wrong with the old one.

When placing a bet, odds range from the very short/low (1.01) to the very long/high (1000), depending on the probability of something happening.

Between 1.01 and 1000, there is pretty much an infinite number of possible numbers, but infinity is a little unwieldy, so we need to simplify things a bit. To do this, sportsbooks and exchanges generally only take bets at predefined intervals. For example, a sportsbook will offer bets at 20/1 or 25/1, but not 19/1.

Each of these allowed intervals are a rung on what we call the “Odds Ladder”.

As well as simplifying the possible number of odds on offer, the Odds Ladder performs another purpose when it comes to exchange betting.

Each of the rungs on the ladder acts as a bucket (ladders, buckets – there’s got to be a window cleaning pun in here somewhere) for liquidity to fall into. The more rungs there are, the more any liquidity will be spread out, and the shallower it will appear, or vice-versa. 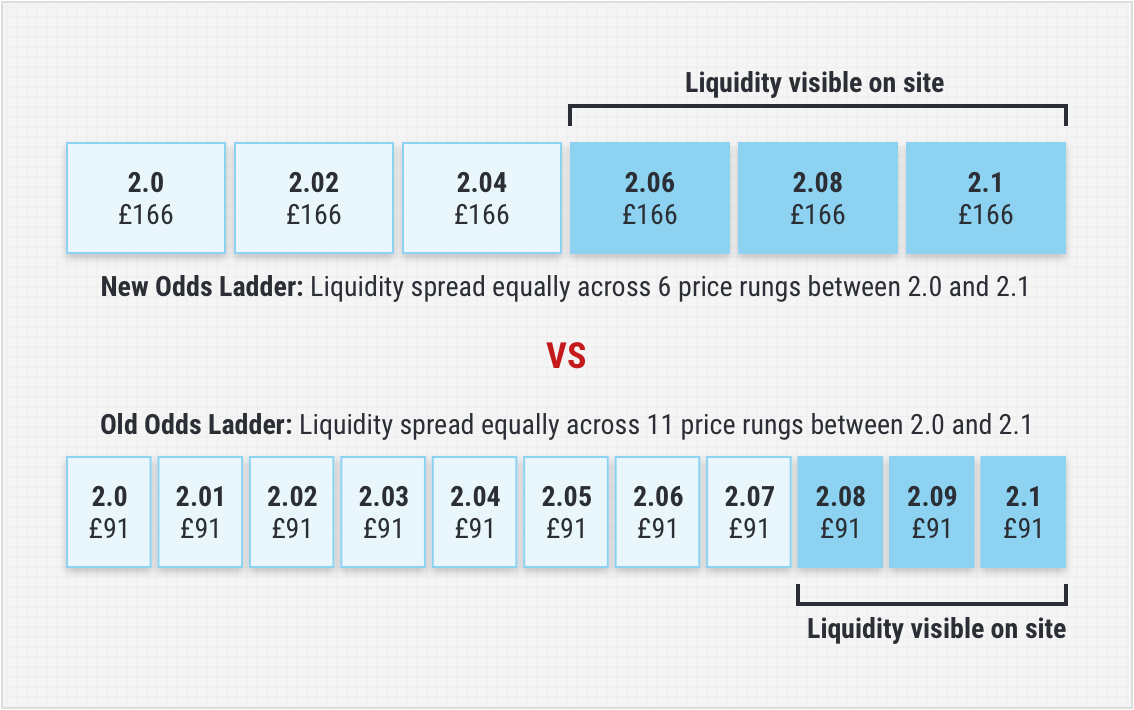 So now that we know what an Odds Ladder is let’s look at why Matchbook has just got themselves a new one.

Back in the days of yore, Matchbook was very much targeted towards bettors with an appetite for US sports. This led to an odds ladder based on US odds, and our decimal odds were derived from there rather than a truly decimal ladder.

Fast forward a few years, and while Matchbook still leads the market for US Sports, we’re now a company much more focussed on UK bettors, and the vast majority of our customers are using decimal odds.

Compared to the standard decimal-based Odds Ladder used in the UK with 350 rungs, Matchbook’s ladder featured somewhere around 600. As we saw above, the more rungs on the ladder, the thinner any liquidity gets spread. Additionally, due to the way the decimal odds were converted from the US odds, we would often have some weird, non-standard intervals that would go to 4-5 decimal places.

While there were benefits to having an unorthodox ladder (such as occasionally being able to pip a competitor’s price), we know that an exchange lives or dies by its liquidity. So after spending several years trying to compete on liquidity with one hand tied behind our back, it was time to make a change.

Our shiny, new, standardised, decimal-based odds ladder got switched on a couple of weeks ago, so hopefully, this has translated to Matchbook’s liquidity looking much healthier – both pre-game and in-play – than in the past.

Have you noticed? We’d love to get some feedback on the new odds ladder and our liquidity in general. If you would like to help us, please fill out the liquidity survey linked here.

Matchbook Product Team @
The team behind the Matchbook site and apps - Management, strategy, design, and analysis.